The sheet plastinate shows how the fracture goes through almost the entire long pastern bone. These fracture can usually not be treated in horses. During treatment horses develop severe problems also in the other foots: see plastination of laminitis in the equine hoof. 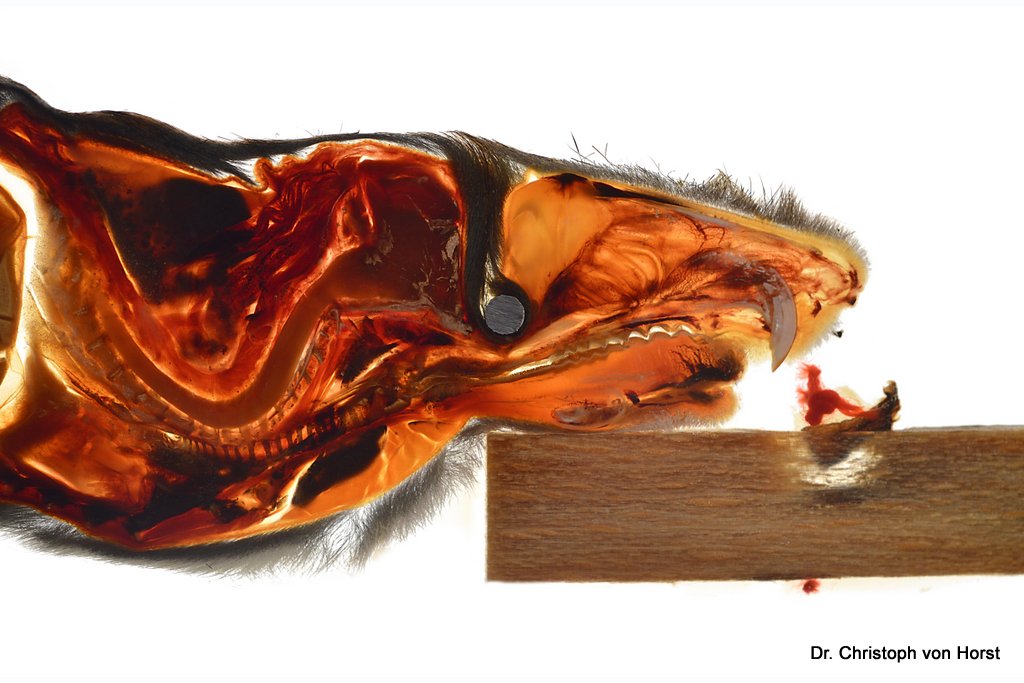 The detail of the fish head vascularisation demonstrates how the transparency of the sheet plastinate can show the whole complexity of the blood vessel anatomy in one single anatomical specimen. You can also find this picture and many more in the plastination-archive.

The use of plastinates in schools, museums and other institutions was the subject of an oral presentation from Dr. Christoph von Horst at the EAVA congress in Stara Zagora (Bulgaria). Veterinary anatomists from all of Europe, the US, South America, New Zealand and Australia heard about how plastinates can be adapted to the needs of a wider range of users. The tension between aesthetics and the scientific message played a major role in the speach. Co-author of the presentation was Prof. Dr. Robert W. Henry (President of the World Association of Veterinary Anatomists). Henry and von Horst also presented a scientific poster that suggests a change of the anatomical nomenclature (Nomina anatomica veterinaria) for the equine maxillary sinuses.

The equestrian magazine Cavallo shows a plastinate of the equine hock (tarsal joint sagittal section) in its Mai issue. In the following months various insight into the horse anatomy will be shown in the horse magazine. All plastinates and anatomical photographs were done by myself. Similar specimens and prints can be ordered directly at HC Biovision.

In the city of Guben, Germany there are rumours that the plastinarium of Dr. Gunther von Hagens might soon be closed down and even that the father might be incapacitated by the son. This was reported in an article by the newspaper “Lausitzer Rundschau“. The son of the bodyworlds creator Dr. Gunther von Hagens denied these rumours: He is going to take over the position as managing director and further employment cuts were necessary. The bodyworlds exhibitions (now in Seoul, San Juan – Puerto Rico, in Naples, Amsterdam und London) are still the most profitable business of the Insitute for Plastination.

Just as interesting as the article in the internet are the comments and discussions about it: It seems that a comment which mentioned the dept overload of the Gubener Plastinate GmbH was deleted by now. This comment also mentioned how the dept overload could be verified at www.bundesanzeiger.de (German Federal Gazette) by entering “Gubener Plastinate GmbH” in the search field.

The fact that Dr. Gunther von Hagens’ son will take over the position as managing director was already announced last summer during a Plastination conference of the International Society for Plastination (link to youtube channel Plastinate).

Update (23.4.2012):
The Speaker of the Institute for Plastination in Heidelberg announced that Dr. Gunther von Hagens’ son Rurik von Hagens will instantly be general manager of the plastination facilities in Guben. The number of staff in Guben was reduced from initial 180 to 42 recently. The “Plastinarium” in Guben produces plastinates that are also offered in an online shop and that are displayed in the bodyworlds exhibitions. Newspaper article in the Märkische Oderzeitung.

We use cookies on our website to give you the most relevant experience by remembering your preferences and repeat visits. By clicking “Accept”, you consent to the use of ALL the cookies.
Wir verwenden Cookies auf dieser Webseite um die Nutzung für Sie zu verbessern. Indem sie auf "ACCEPT / ANNEHMEN" klicken stimmen sie ALLEN Cookies zu.
Cookie settings / EinstellungenACCEPT / ANNEHMEN
Manage consent

This website uses cookies to improve your experience while you navigate through the website. Out of these, the cookies that are categorized as necessary are stored on your browser as they are essential for the working of basic functionalities of the website. We also use third-party cookies that help us analyze and understand how you use this website. These cookies will be stored in your browser only with your consent. You also have the option to opt-out of these cookies. But opting out of some of these cookies may affect your browsing experience.
Necessary Always Enabled

Performance cookies are used to understand and analyze the key performance indexes of the website which helps in delivering a better user experience for the visitors.

Analytical cookies are used to understand how visitors interact with the website. These cookies help provide information on metrics the number of visitors, bounce rate, traffic source, etc.

Advertisement cookies are used to provide visitors with relevant ads and marketing campaigns. These cookies track visitors across websites and collect information to provide customized ads.

Other uncategorized cookies are those that are being analyzed and have not been classified into a category as yet.